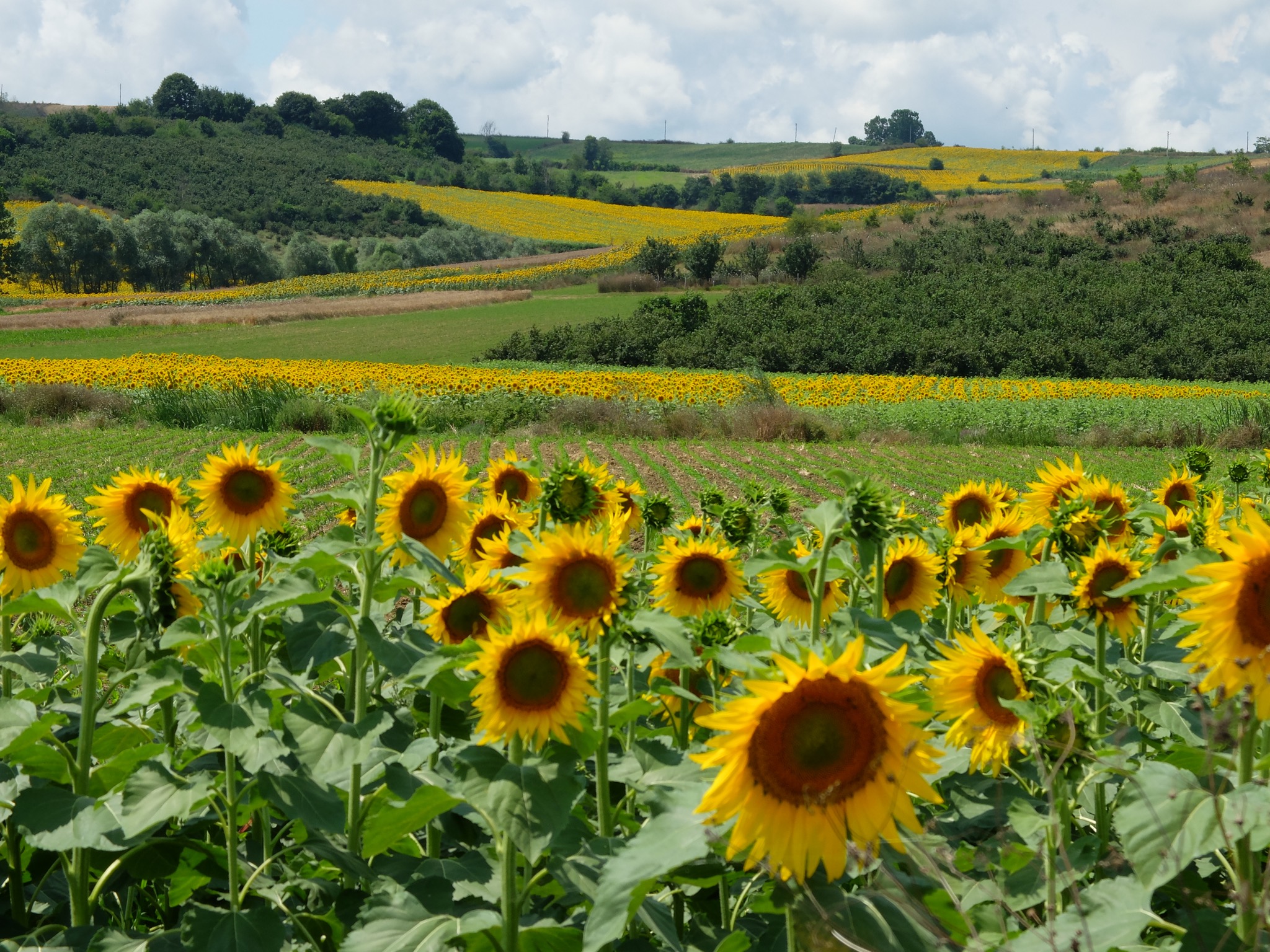 Istanbul is, I believe, one of the most magical cities in the world.

It is unique as it is the only metropolis in the world to extend into more than one continent.

Napolean was apparently very impressed with Istanbul. If all the world were a single state, he said, this city should be its capital

Home to nearly twenty million inhabitants, the city has been convulsing for many years now by a population influx, to some degree losing its charm

Absorbing new residents each year, areas are being opened to property development by destroying former green reaches, with new districts rising among once protected forests.

To say the least, Istanbul is congested, with hopelessly clogged streets , very few parks and greenery.

I watch in horror as vast areas of state lands, and in some cases city parks, are being handed to private developers.

Fortunately some strips in the northern part of the city along the Black sea coast remain untouched, areas where property development is still prohibited.

I am fortunate to live in a gated community in the suburbs of Istanbul on the European side in the midst of a forested area. Regrettably my neighborhood is also slowly but surely becoming barren.  Hundreds if not thousands of trees are being felled for new homes, for motorways to link the new emerging districts and much to my horror for new shopping malls.   It is a pretty vicious cycle; motorways cutting through more forests, opening new areas to property development, leading to new districts …leading to felling of more trees and so on and so on.

This past weekend, instead of immersing myself in the arts scene to feed my soul as I usually do or retail therapy which is seldom a preference, I opted for a route to find peace in nature.

Nature does have a unique constellation of features with a restorative effect.  A little dose of nature always helps me recharge, cure my mental fatigue.

The first stop on my “ecotherapy” route was a little fishing village called Poyrazköy on the Anatolian side of Istanbul close to the Black Sea. 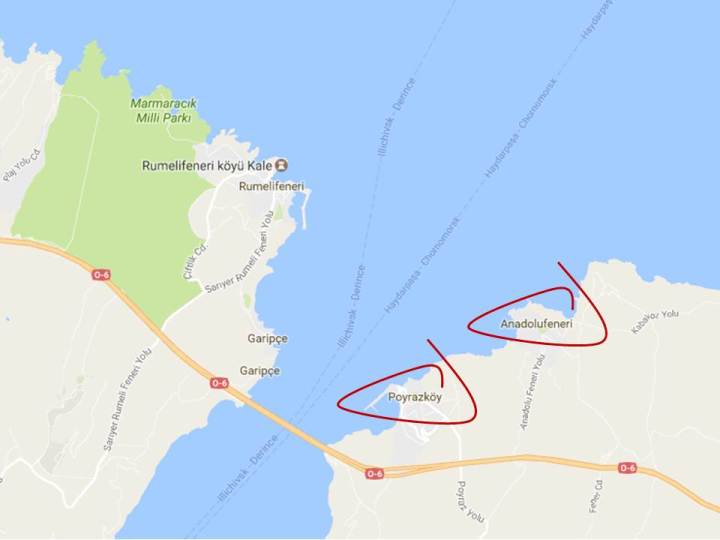 To cross from the European side to the Anatolian side, I selected the newly built suspension bridge.  The third bridge, connecting the two continents in Istanbul is nearly 2 km long, with approximately 1,5 km across water.  The hour drive from my home in Gökturk to Poyrazköy was so harmonious, so peaceful among forests, no traffic lights, no traffic jams.

Poyrazköy is one of the most beautiful and adorable fishing villages of the Bosphorus perched on a hill by Anadolu Kavağı in the district of Beykoz. 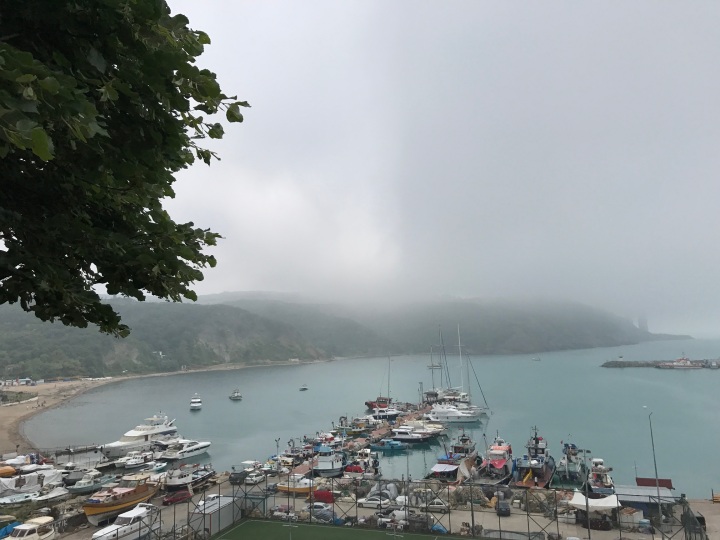 Home to one of the best preserved natural habitats in Istanbul, it is ideal for anyone who needs to escape the hustle and bustle of the city seeking peace and calm.

Poyrazköy literally translates as North Wind Village. However, as if to give lie to its name, the north wind’s chills are not felt in this picturesque harbour village.

The natural breakwater has been turned into a port at the north end of the Bosphorus. The harbour, protected from the rough winds and currents is a preferred spot for yachts and boats to anchor for shelter or a break while sailing from Istanbul to the Black Sea. 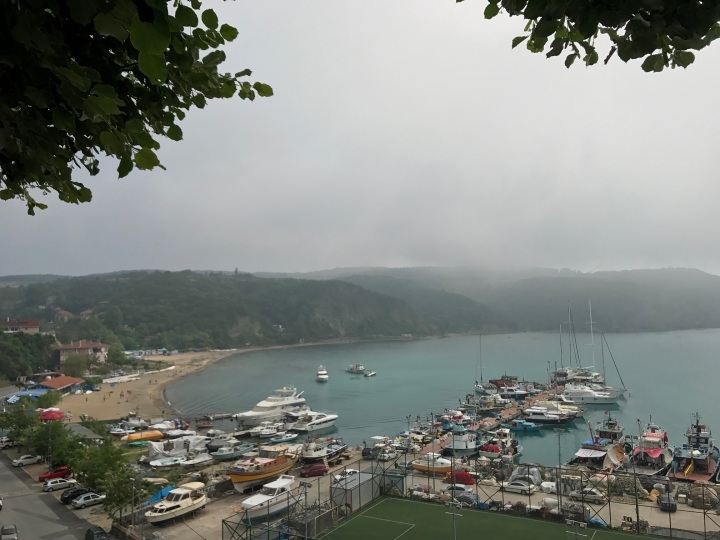 Nearby are three sandy beaches with the purest sea water around. One of the beaches only admits women (Poyrazköy Women’s Beach), the remaining two admit both men and women.  All three charge a small entrance fee. 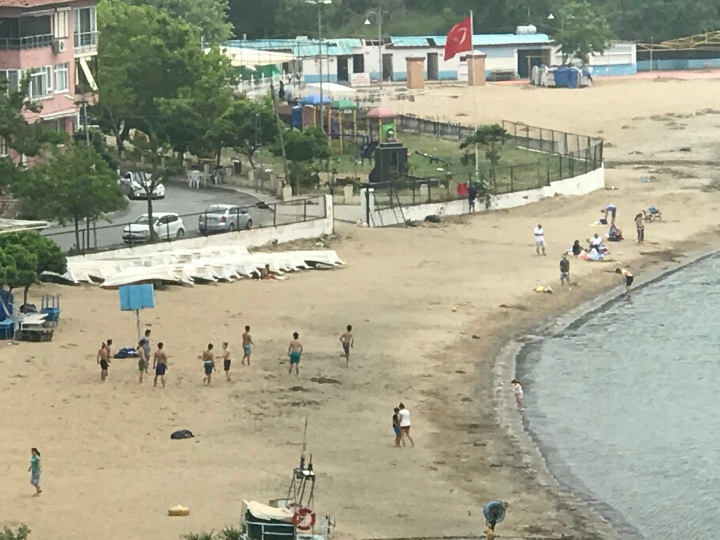 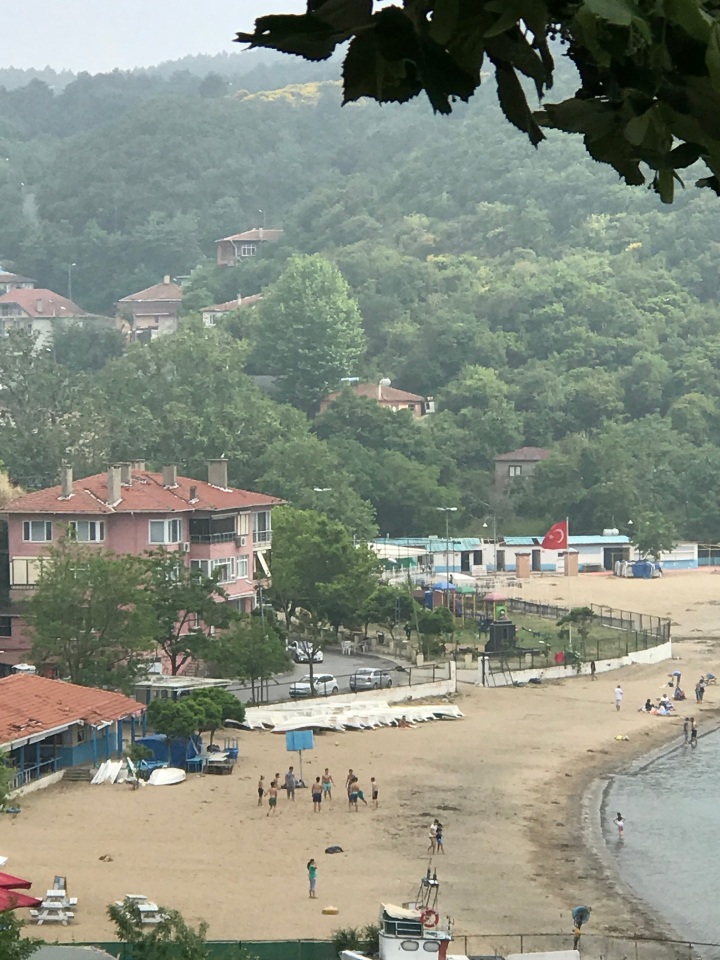 Although I did see signs for Poyrazköy Caste, built around 600 years ago, I did not feel like making the uphill hike, leaving the breathtaking view to be enjoyed from uphill for my next visit.

Most of the village population make their living by fishing.  Several restaurants line the beach, all offering excellent fresh fish, caught daily.   It seems that with so many fish restaurants around, it is the cats who are doing very well in this village.

On Saturdays a small local market takes place on the hillside lanes where the locals sell fresh fruit, vegetables and spices

I took a little break at a local, unpretentious café, enjoying the view from the hill top, the peace and calm with a cup of Turkish coffee, practicing tasseography. (This is the academic term for Turkish coffee fortune telling) 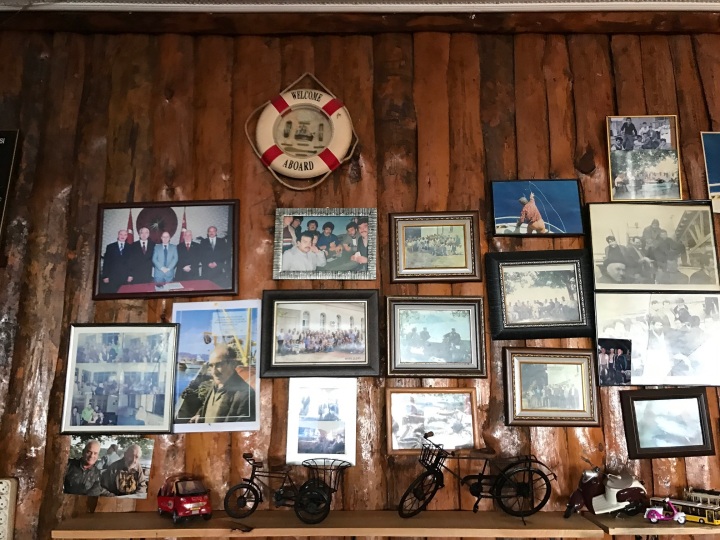 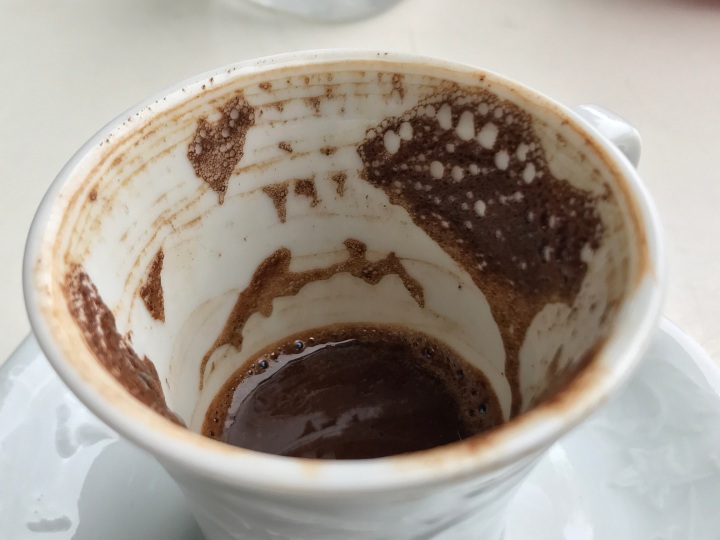 It was a foggy day restricting the view somewhat, yet what I could catch, the third bridge a silhouette in the horizon, was breathtaking.  The sky and Black Sea merging into the same pale gray colour with a myriad of fishing boats lined along the harbour. 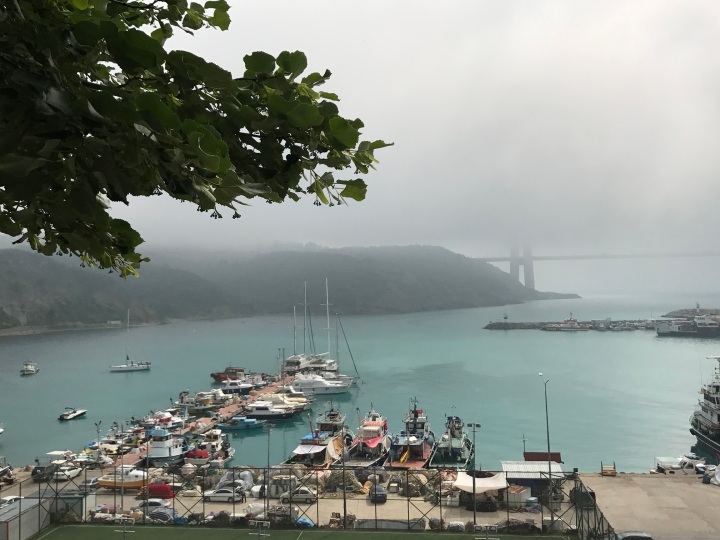 Fishing season I am told starts on Sep. 1 and ends on April 15. So locals have four months to prepare until the season starts up again.

I watched the fishermen in the harbour repairing their nets, chattering away to a cup of tea, the locals playing cards and backgammon, the little fishing boats coming and going.

After Poyrazköy my next stop was Anadolufeneri, about 6 km away along the coast. 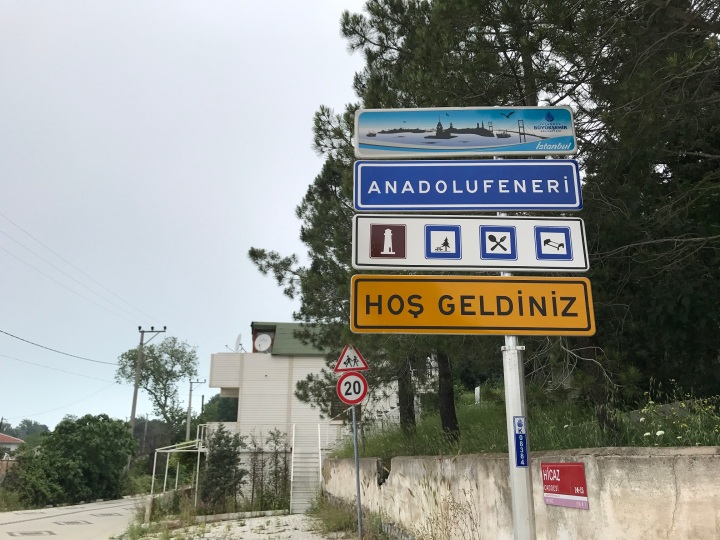 Anadolu is the Turkish name for Anatolia.

Anadolu Feneri gets its name from the historical lighthouse that was built here in 1834 to provide safe navigation for the French and British during the Crimean War. The lighthouse stands 75 meters above the sea on Yon (Hrom) Hill. At 20 meters tall, its white paint cracking and falling off, it continues to greet navigators today.

Next door is a small mosque built in 1800 with a magnificent view. 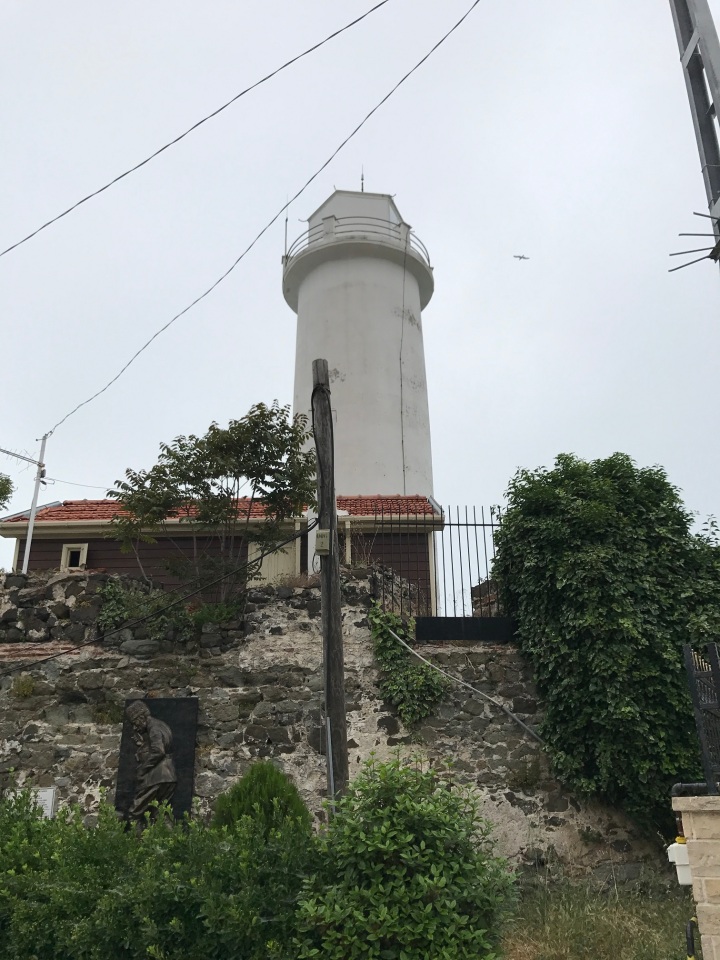 Anadolu Feneri was apparently operated by the French until 1933 when the 100-years concession was cancelled and the Turkish authorities took over. Today, it is maintained by the Coastal Safety Authority. 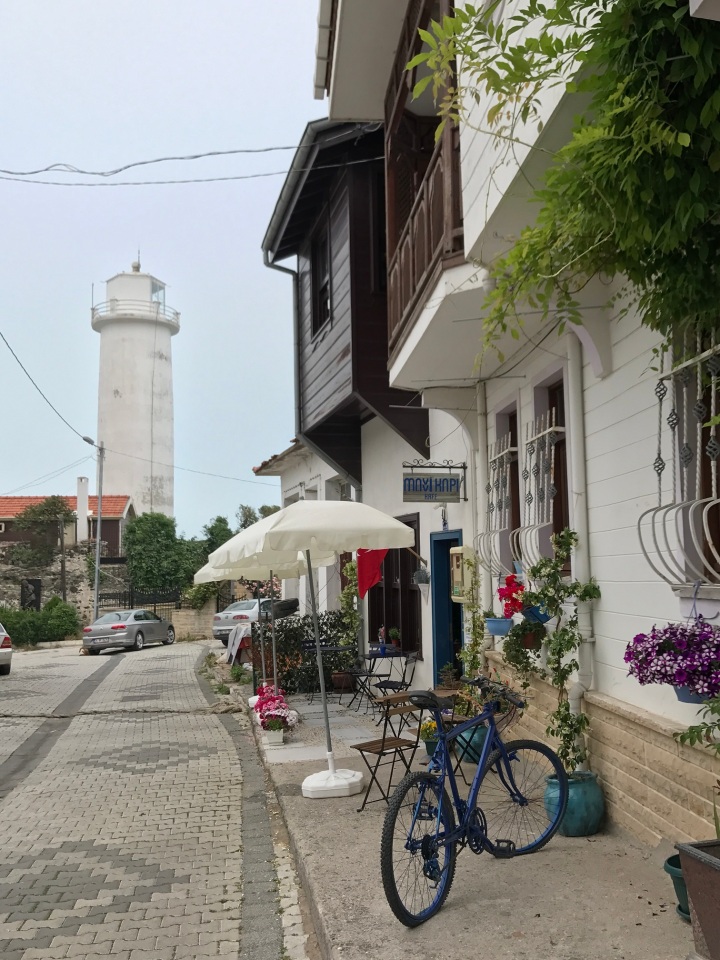 It is across from the lighthouse Rumeli Feneri, on the European side of the strait at a distance of 2nmi. A connecting line between the two lighthouses marks the northern boundary of the Port of Istanbul. 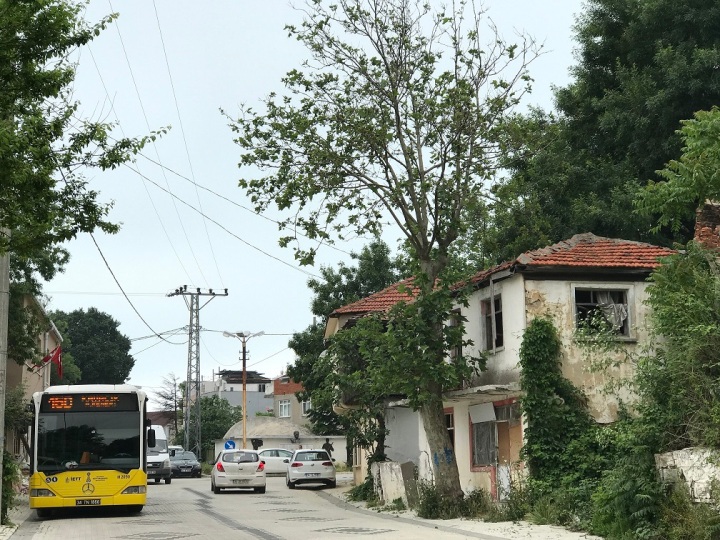 Anadolufeneri is much smaller than Poyrazköy. The village with a population of around 500 is set amidst oak and beech trees.

There are a few cafes and fish restaurants with heart stopping views. 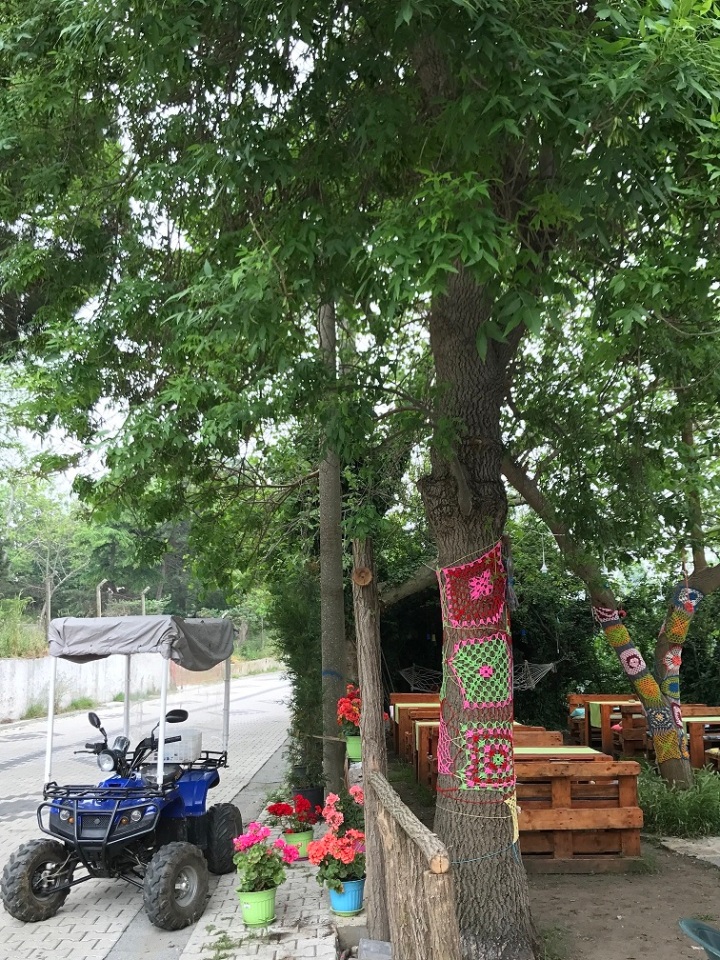 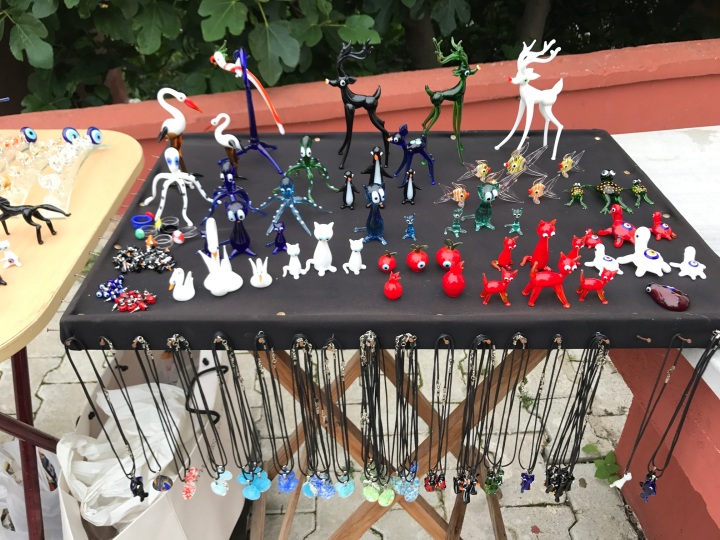 Wandering around the narrow, winding roads, listening to the waves and enjoying the magnificent scenery where the Bosphorus meets the Black Sea did wonders to uplift my spirit. 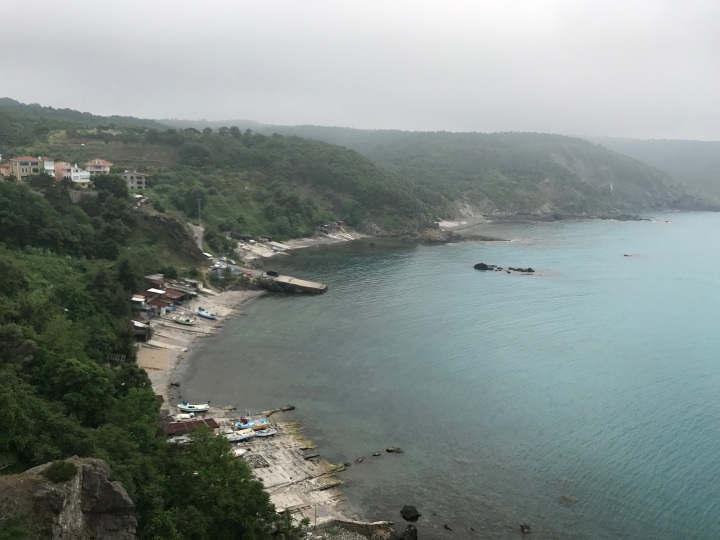 There was another very pleasant surprise on my drive back home.  A farm sign for fresh goat’s milk and organic eggs captured my attention.  Of course I had to just dive in. 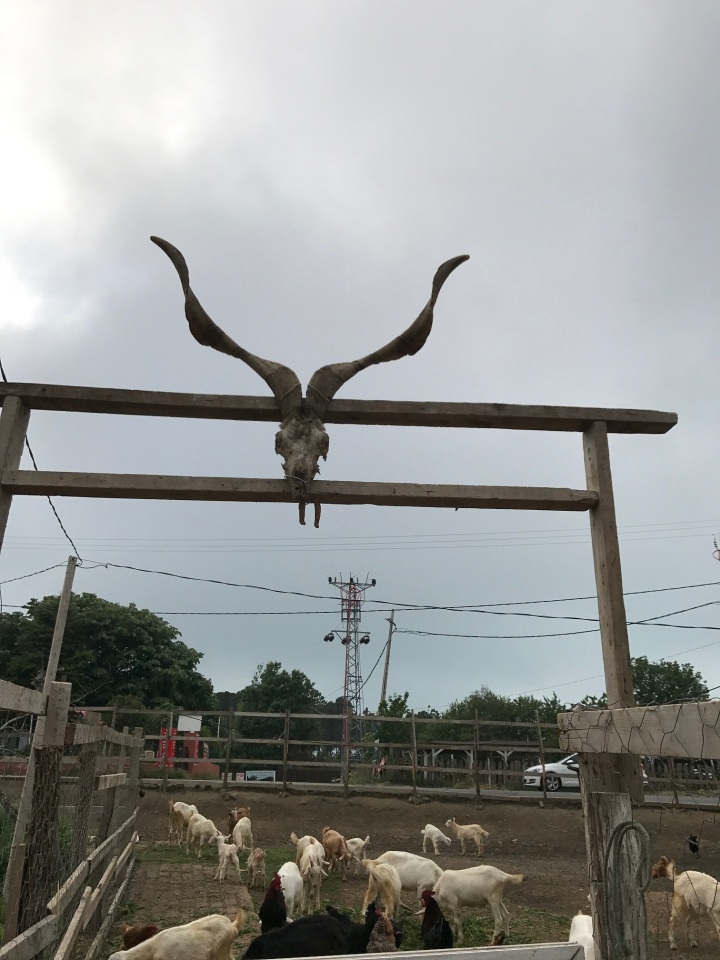 I am not one for goat’s milk.  It has an almost sour and heavy taste.  I guess it must be because I found the goats so cute and the owners so heartwarming, I found myself buying some goat’s milk and quail eggs. 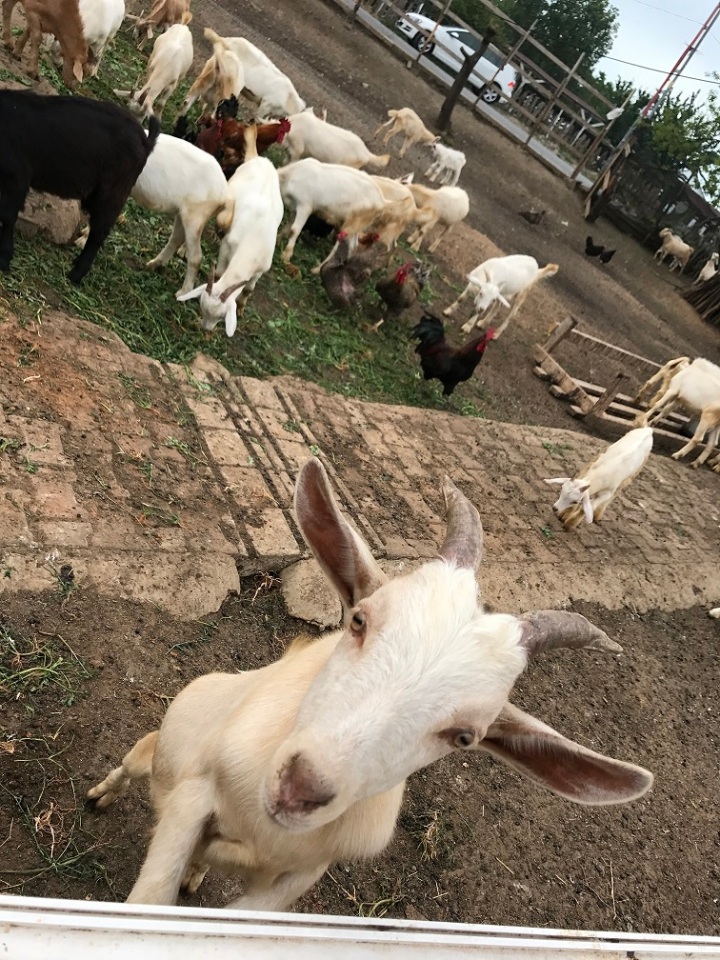 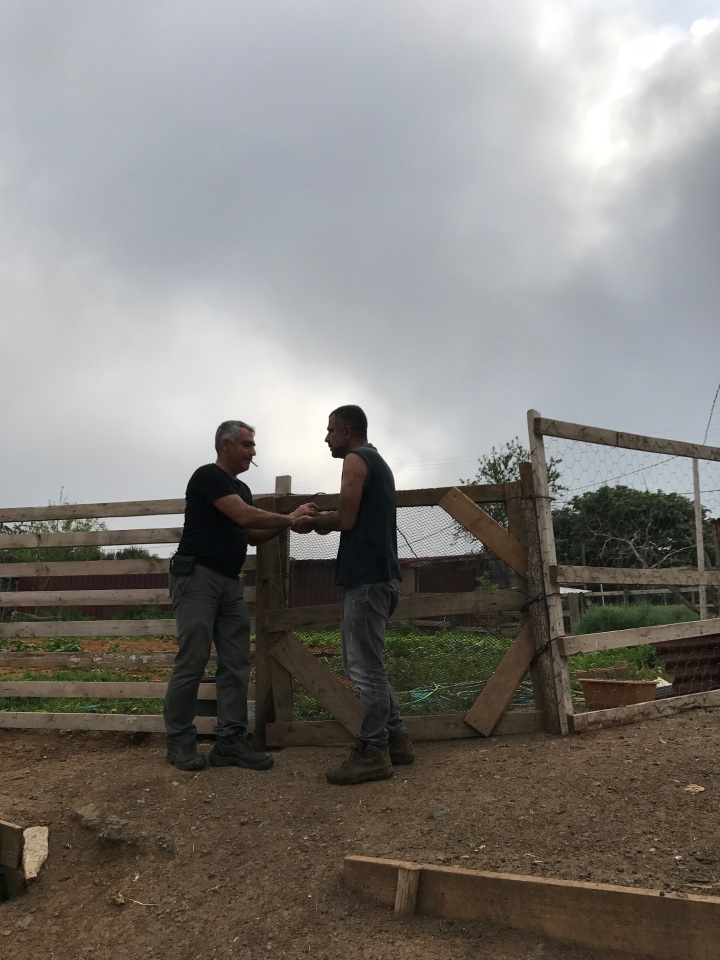 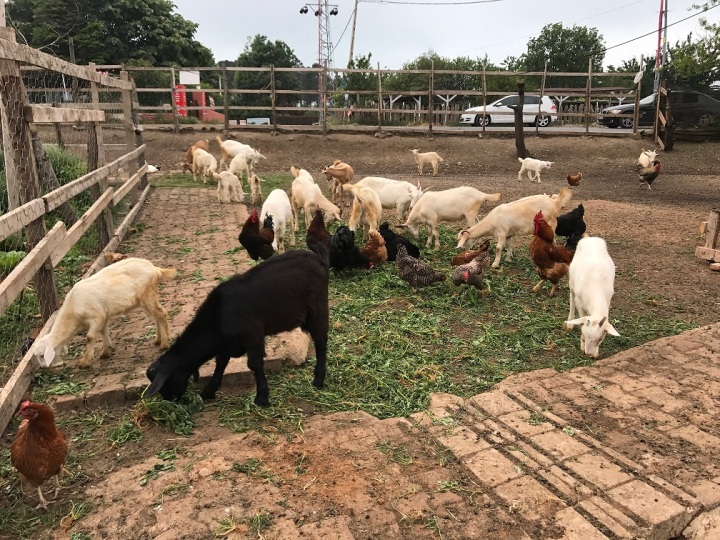 This area, so close, yet almost completely outside the city, is simple, quiet and peaceful. It welcomes anyone who longs for the scent of the sea, the waves and the taste of fresh fish. The villagers, so very eager to show visitors the hospitality of Black Sea fishermen.

No doubt nature has a therapeutic effect on the human race.

What man-made environments take away from us, nature seems to gives back, boosting vitality, promoting calmness and giving the opportunity to replenish exhausted mental resources.

It is thus imperative that we take care of mother nature because when trees die, people die.

3 thoughts on ““Ecotherapy” in the fishing villages of Istanbul”