Paris is famed as “La Ville Lumière ” due to its reference as the birthplace of the Age of Enlightenment – the center of education and ideas throughout Europe in the in late 17th- and 18th-centuries. And this self-commendatory motto is used by Parisians today to convey the magnificence of the city as still being the cultural and material beacon to the world. 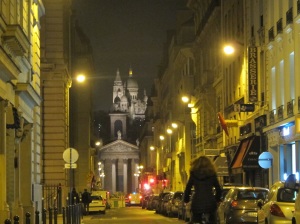 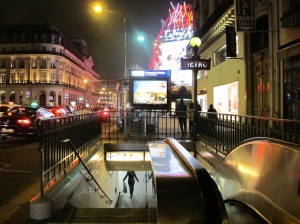 I believe Paris also holds its “city of lights” tag from the “wattage” point of view even after a nationwide”lights-out” law which became effective Mid 2013 forcing shops and other buildings to switch off their lights every evening, between 1am and 7 am, in a bid to save energy. My nocturnal stroll on the last evening of January is testimony to the fact that even this initiative to reduce waste and save energy does not seem to have frayed the historical banner of “La Ville Lumiere”.

Paris became what it is today under the “Haussmann Plan”, which was basically a renovation program commissioned by Napoléon III who apparently decided to modernize Paris after seeing London, a city transformed by the Industrial Revolution, encompassing all aspects of urban planning from large open parks to a complete sewer system.

This restructuring of Paris, establishing the foundation of long, straight boulevards with cafés and shops creating a new type of urban scenario was undertaken by the then Seine prefect, Baron Georges-Eugène Haussmann, between 1853 and 1870. Today his name is kept alive on a very busy avenue, Boulevard Haussmann, a 2.5 kilometre (1.57 mi) long tree-lined avenue stretching from the 8th to the 9th arrondissement, home to the big department stores, familiar brands, solid yet ornate bank buildings and the headquarters of the French daily newspaper, Le Figaro.

The area that is mobbed by people traffic during the day, Parisians and tourists storming in and out of the department stores, roads busy with tourist buses, taxis, bankers, professionals charging ahead, puffing on their cigarettes, definitely goes through a metamorphosis after the sun falls asleep.

The change of ambiance is drastic, but not jarring.
Paris does not simply fall asleep after the sun sets. The crowds thin out, another kind of “fête des lumières” takes center stage and the city becomes a different kind of museum. Sure it is more silent, footsteps echo on the cobble stone streets, yet the moonlight and the symphony of the lights adorning the magnificent buildings provide strollers with a different kind of energy to move.

How Parisians seem to make impeccable beauty and harmony look effortless, both during the day and at night totally eludes me.

That particular evening I strolled around the part of the Boulevard Haussmann between Chaussée d’Antin et Havre Caumartin metro stations in the 9th area, where the famous Printemps and Galeries Lafayettes department stores are located, and behind and around the Paris Opera Garnier, past the then dormant Apple store. That evening stroll turned out to be another Parisian urban pleasure for sure.

Since its inauguration in October 1912, the flagship Galeries Lafayette has remained true to its byword – offering the “best merchandise in all of Paris”. Serving up both fashion and innovation, the window displays have always been instrumental in setting the scene, with aspirational designs to tempt customers into the store. The Haussmann department store is famed as the second top tourist attraction, after the Eiffel Tower, one of the must-see “greats” in the capital.

During the day golden lights filter through its domed roof, bathing the hallway and the products in sunlight. That evening the magnificent building built and decorated in the style of Paris Art Nouveau by artists from the École de Nancy was aglow in red and white neon sticks – provocative, sensual yet warm. 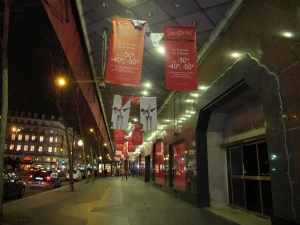 The iconic symbol of Galeries Lafayette, the 43 metre dome, was radiant in a flirtatious red. The Neo-byzantine stained glass windows designed by the master glass-maker Jacques Gruber completely hidden in the dark of the night.

The printemps department store housed in three buildings, with an 1865 façade and 1923 cupola have been registered as listed as historical monuments since 1975. In 1939, to avoid the risk that it would be destroyed in bombing attacks, the cupola was dismantled and stored at Clichy. It was restored in 1973 by the grandson of its original designer, using plans that had been kept in the archives of the family business. 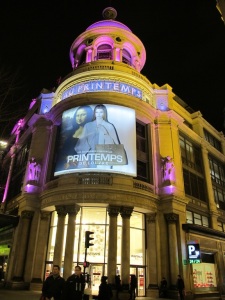 That evening the Printemps store was bathed in a pink hue, giving it that very soft, fresh look, conveying innocence and a child-like personality. 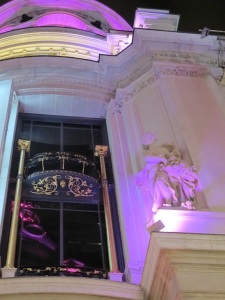 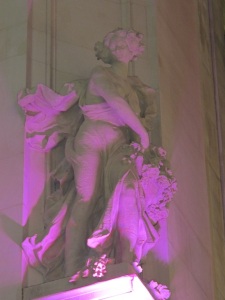 Paris Opera is another iconic building in the area, known as the Palais Garnier in recognition of its opulence and its architect, Charles Garnier,who won the architectural design competition to build this magnificent piece of art. This masterpiece of the first rank is a symbol of Paris as well as being the setting for Gaston Leroux’s 1910 novel The Phantom of the Opera and the novel’s subsequent adaptations in films and Andrew Lloyd Webber’s popular 1986 musical. 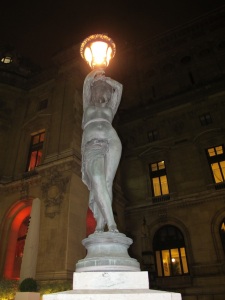 I was not the only one admiring the magnificent typical Beaux-Arts architecture of the opera building that evening. It seems that most everyone walking by were dazzled by the allure and overcome by the strong emotion to simply stand and admire the grace of the Opera Garnier.

Of course there was, as there always is, a downside alongside the beautiful, shadows of the homeless meeting in the dim alleyways, seeking out a warm and quiet spot to spend the night. 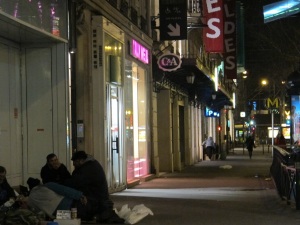 I would say that the “petit bonheurs,” or small pleasures of Paris should include a night promenade.

That evening, decked out in magical lights, especially two department stores – the luxury bazaars of Haussman – and the Opera Garnier opposite bestowed an alluring dimension to the area. The day time traffic, hustle and bustle, the energy, the dynamism and the colorful pace had given way to a different colour and rhythm once the sun had set, neighbouring lights had dimmed and the magnificent buildings were adorned in glorious lights. 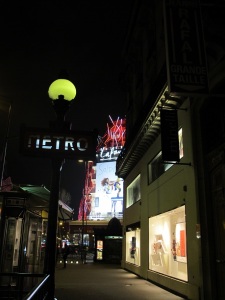 The nocturnal facelift, the neon cityscape is surely captivating and the capital lives up to its name as the ‘City of Light’

How to get there?
Metro is the easiest solution
Line 9, Galeries Lafayette